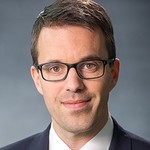 Brian Field is a Senior Counsel with significant experience litigating cases spanning an array of subject areas in trial and appellate courts.  Brian has handled class actions, contract disputes, tort claims, constitutional claims, and cases involving the interpretation of federal statutes and regulations.  Through that work, Brian has developed an expertise representing clients throughout the discovery process, motions practice, and at trial.  Brian has also briefed and argued many cases in appellate courts.

Before joining Schaerr Jaffe, Brian served as an Assistant United States Attorney in the U.S. Attorney's Office for the District of Columbia.  In that role, Brian represented the United States in all stages of civil litigation, with an emphasis on defending the United States against employment discrimination, FOIA, Federal Tort Claims Act, Administrative Procedure Act, immigration, and Bivens claims.  Brian handled multiple jury and bench trials and argued several cases before the U.S. Court of Appeals for the D.C. Circuit.  Brian also received numerous merit-based awards for exceptional achievement.

Earlier in his career, Brian served as a political appointee at the Department of Defense during the George W. Bush administration.  Brian is a graduate of Case Western Reserve University School of Law and Messiah College.