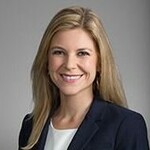 Ms. Squiers began her legal career in the litigation department of Gibson, Dunn & Crutcher's Dallas office. She then served as a law clerk to Judge Don R. Willett of the United States Court of Appeals for the Fifth Circuit.

Ms. Squiers graduated from Princeton University and was a recipient of the University's ReachOut Fellowship, which is awarded to two seniors to complete a year-long entrepreneurial service project after graduation. During her fellowship year, Ms. Squiers worked at the nation's largest adoption agency and started a mentoring program for youth leaving foster care.  She received her J.D. from Southern Methodist University Dedman School of Law where she served as Editor-in-Chief of the SMU Law Review and interned for Catharina Haynes of the United States Court of Appeals for the Fifth Circuit. During law school, Ms. Squiers was a student attorney in the criminal defense clinic where she managed dozens of misdemeanor cases, and in the child advocacy clinic where she represented children in the foster care system.