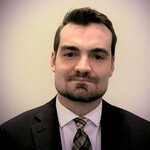 Aaron Gordon is an associate with Schaerr | Jaffe LLP. Previously, he served as a law clerk to Justice Jimmy Blacklock of the Texas Supreme Court and Judge Don R. Willett of the U.S. Court of Appeals for the Fifth Circuit.

Aaron graduated summa cum laude from Northwestern University, where he served as speaker of the Northwestern Political Union. His thesis studying the U.S. Supreme Court's jurisprudence on economic liberty was awarded the Political Science Department's 2017 Kenneth Janda Prize for Best Undergraduate Honors Thesis. Aaron subsequently earned his J.D. from Yale Law School, where he was a member of the Federalist Society and an editor of the Yale Law & Policy Review. As a law student, Aaron was part of the Advanced Appellate Litigation Clinic, where he drafted appellate briefs on behalf of prisoners in federal civil-rights cases. He also interned at the Office of the Texas Solicitor General and the New Civil Liberties Alliance. Aaron's scholarship has appeared in such publications as the Yale Law Review and the N.Y.U. Journal of Law & Liberty, and was cited by the U.S. Supreme Court in West Virginia v. EPA.

*Not admitted to the D.C. Bar. Admitted to the Texas State Bar and practicing under the supervision of D.C. Bar members pursuant to Rule 49(c)(8).