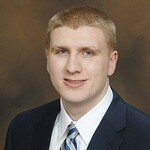 Aaron Ward is an associate with Schaerr | Jaffe LLP. He joined the firm after clerking for Judge Julius Richardson on the U.S. Court of Appeals for the Fourth Circuit.

Aaron graduated in the top 10% of his class from Harvard Law School, where he was Deputy of Academic Affairs in the Federalist Society, Vice President of Finance of the Harvard Law Republicans, an Executive Editor for the Journal of Law and Public Policy, and a digest contributor for the Journal of Law and Technology. During his summer, Aaron worked at the New England Legal Foundation and at the Houston office of Simpson Thacher. He has a degree in Electrical Engineering, with a 4.0 GPA, from the University of Michigan-Dearborn. He was on the school's rifle team, leading the team to several NRA championships, and was president of the school's Tau Beta Pi chapter. Before law school, he worked on vehicle simulations and artificial intelligence in the automotive industry, and on autonomous UAVs.