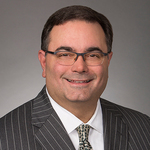 Chris Bartolomucci, a partner at Schaerr|Jaffe LLP, is a litigator who has represented major corporations, government entities, and individuals on appeal and in trial court. Chris has handled a wide range of cases involving constitutional law, complex statutory issues, products liability and tort, and other issues.

An accomplished appellate lawyer, Chris has presented oral argument in the U.S. Supreme Court and won. As a short-listed candidate for nomination to a judgeship on the U.S. Court of Appeals for the Fourth Circuit, the Virginia State Bar gave Chris its highest rating of “Highly Qualified.” The Seventh Circuit referred to Chris in a published opinion as “first rate counsel.” Chris has argued and won on appeal for his clients in state supreme courts and federal circuit courts.

At the trial court level, Chris served as lead counsel and presented the closing oral argument for the State of South Carolina in the successful defense of its voter ID law before a three-judge federal court. Chris has represented in federal district court parties such as the U.S. House of Representatives; the world's second-largest elevator company; a top-5 public university; state governments, and foreign nationals.

Since joining Schaerr|Jaffe in 2020, Chris has participated in several trials and preliminary injunction hearings in federal court.  In 2021, Chris served as outside counsel to the Virginia Redistricting Commission.  Chris has represented individuals seeking executive clemency and has helped three clients obtain full and unconditional pardons from the President of the United States.

Chris has been a litigation partner in both large and boutique law firms in D.C. for more than two decades. Prior to joining Schaerr|Jaffe, Chris was a partner at Kirkland & Ellis, at the Bancroft law firm, and at Hogan Lovells.

In 2001-2003, Chris served in the White House as Associate Counsel to President Bush. His other government experience includes service as Associate Special Counsel to the U.S. Senate Whitewater Committee; as a Bristow Fellow in the Solicitor General's Office of the U.S. Department of Justice; and as Counsel to the D.C. Inspector General. After law school, Chris clerked for Judge William Garwood of the U.S. Court of Appeals for the Fifth Circuit.

Chris graduated from Harvard Law School, where he was an Editor of the Harvard Law Review. He received his undergraduate degree from Dartmouth College.

Chris is admitted to the D.C. Bar and the Virginia State Bar, and admitted to practice before the U.S. Supreme Court, every U.S. Circuit Court of Appeals, and a number of federal district courts.