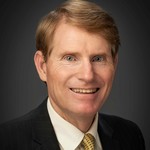 Nicholas P. Miller serves as Senior Counsel with Schaerr Jaffe, and is a tenured Professor of law and religion at Andrews University in Berrien Springs, Michigan. He has practiced law for more than twenty-five years in state and federal court, specializing in the needs of churches, religious colleges and universities, and other religious institutions.  He has served in the civil litigation departments of the District of Columbia, as well as major US corporate law firms. He has a PhD in legal and religious history from the University of Notre Dame, and received his JD from Columbia University, where he was an editor of the Law Review.

He has appeared before the United States Supreme Court, helped draft federal legislation protecting religious freedom, and was the executive director of the Washington, D.C.-based Council on Religious Freedom. Dr. Miller has published more than fifty scholarly and professional articles and book chapters on topics of church and state. He has written or edited several books, including The Religious Roots of the First Amendment (Oxford University Press, 2012), and 500 Years of Protest and Liberty: From Martin Luther to Modern Civil Rights (Pacific Press, 2017).