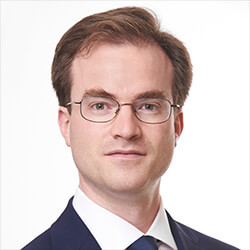 On Tuesday, December 8, 2020, the U.S. Senate confirmed Stephen Schwartz to be a judge on the U.S. Court of Federal Claims, becoming the eighth Trump appointee to the court.

"I believe that my own work has been characterized not only by integrity and careful legal reasoning, but by objectivity and fairness," Schwartz said during his confirmation hearing in 2017.

Among other matters, Stephen has secured victories for clients in two cases before the United States Supreme Court: Mutual Pharmaceutical Co. v. Bartlett, which concerned federal preemption of State tort laws, and Horne v. U.S. Department of Agriculture, in which the Supreme Court held that a decades-old federal program effected an unconstitutional taking of private property without just compensation. Stephen has also argued two cases in state and federal appellate courts, and won both.

Stephen was a litigation associate for several years at the Washington, D.C. office of Kirkland & Ellis LLP. After leaving Kirkland, he practiced administrative law litigation against federal regulatory agencies at Cause of Action Institute, a D.C. nonprofit. He received his B.A. in History from Yale College and his J.D., with honors, from the University of Chicago Law School, where he was an editor of the Law Review. He clerked for Judge Jerry E. Smith on the U.S. Court of Appeals for the Fifth Circuit.

Schwartz is the second Schaerr-Jaffe attorney to be appointed to a federal judgeship under the Trump administration after Kyle Duncan's appointment to the Fifth Circuit in 2018.

Comments have been disabled.